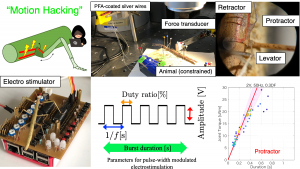 Insects exhibits resilient and flexible ability to retain the capacity to walk not only in response to environmental changes but also to changes in their body properties, e.g., leg amputation. While the motor control paradigm governing the inter-leg coordination in such adaptive walking has been extensively described in past studies, the mechanism remains unknown. In this research project, to overcome this situation, we use “Motion Hacking”, a method of hacking leg movements by the electrostimulation of leg muscles while retaining the insect’s own sensorimotor functions, which we have developed thus far. By observing the adaptation process of inter-leg coordination by the insect nervous system when leg movements are externally controlled via Motion Hacking, we aim to elucidate the “flexible” inter-leg coordination mechanism hidden behind insect locomotion. We believe that the elucidation of this ability will contribute not only to biology but also to the engineering development of robots with abilities comparable to those of insects, finally contributing to providing control methods for intelligent soft robots.